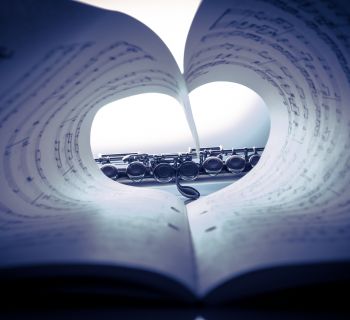 How choosing the right music can make your audio sing.

There is more to music than meets the ear. Excuse the paraphrasing, but in the world of commerce music not only impacts the human psyche it can also affect the bottom line.

Today we are accustomed to music being played everywhere we go from the elevator to the supermarket check-out.

This marriage between commerce and music began long ago. Even before the success of commercial radio or the “wireless” as it was known.

It started in 1910 with “Muzak” the name Major General George Squier called the multiplexing technology he invented to carry music over electricity lines.

The name originated in homage to the brand Kodak; George stole the “ak” added it to the first syllable in music and put a “Z” in the middle; “Muzak”.

“Muzak” was sold as an instrument of productivity and promoted as a science. The company marketed “Stimulus Progression Programs” designed to avoid listener fatigue. These were 15 minute blocks of music alternating with 15 minutes of silence. As the working day passed the music increased in tempo and featured more intrusive brass instrumentation.

It became fashionable for industry to adopt the “magic of Muzak” to stimulate activity. Meanwhile households subscribed to the service as entertainment and paid a fee as part of their electricity bill.

Despite the proliferation of radio stations through the 40’s and 50’s “Muzak” remained popular into the 1970’s. It was even used by NASA to help soothe astronauts through periods of inactivity.

In the 80’s and 90’s well before the advent of the internet, recorded music became more accessible. Companies providing background music like “Muzak” lost out to new organisations offering “foreground music” and “original artist music programming”.

Today managers still recognise the influence music has in altering the mood of employees and customers. They look for companies able to provide suitable music programming to help achieve their objectives at a reasonable cost.

Businesses that use music have to pay the people who created and published that music. It might be music playing in-store. Or music on the Telephone On Hold Messages. Music probably features in the company’s radio and TV ads, corporate films or website videos. Even if it’s just a radio playing in the back office all day, the business has to pay.

In Australia, when music is played at any business, the law requires users to pay an annual licence fee to APRA. However these annual fees can be negated by using tracks from the libraries of Royalty Free Music available from Media Group.

It’s essential to choose music that conveys the “right message” and projects the desired company image. The experts at Media Group can advise you on making up playlists that will achieve your objectives. They will also ensure your chosen music will not contain language that may offend customers or see you wind up in court.

Music is a powerful tool in the marketing mix. Make sure you use it well. Whether it’s a catchy little track on your TV ad or the breezy in-store tunes supporting your Summer Holiday Sale, choose your music wisely and hear the cash registers sing.