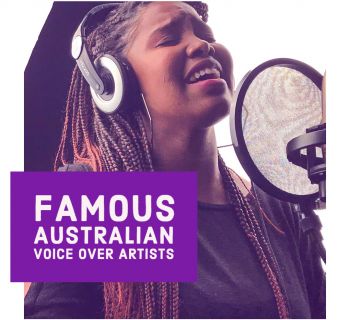 The unique power in a voice

When you meet a person for the first time what feature stands out to make them quintessentially different? Not their shoes! Maybe the eyes. Often it’s the voice.

Like fingerprints, the human voice is unique to its owner. You could call it an audio fingerprint. In fact, the remarkable Mel Blanc, an American voice artist, is one of the only people on record with the ability to change their vocal “fingerprint”.

So what Famous Australian Voice Over Artists have risen above all other contenders to stand out in that ferociously competitive career?

Most of the voices you hear reading commercials on radio, TV, the internet or cinema are usually nameless.

There will be other times when you’ll immediately recognize the voice and can put a name to its owner. Or it may be a case of the advertiser hiring a well-known actor to “ride-along” on that person’s popularity.

A veritable plethora of voice talent

Sitting high on the ladder of Famous Australian Voice Over Artists is actor Nick Tate. You may recall him for his AFI Best Actor award as the alcoholic priest in Fred Schepisi’s film The Devils Playground.

As one of Hollywood’s Premiere Voice Over Artists Nick’s dulcet tone can be heard on film trailers for classics like Jurassic Park, Braveheart, Tomorrow Never Dies, The World Is Not Enough and an endless list of credits.

Another tinsel-town Aussie favorite is Nicole Kidman. She voiced “Norma Jean” in Happy Feet and ‘Luli” in The Guardian Brothers. Her daughter's Faith and Sunday are heard in Angry Birds 2.

For the past 60 years, the voice of Sydney sider Kev Goldsby has been on everything from the Movie Tone Newsreels in cinemas to Nestle Quick and Australian Army recruitment commercials.

Challenging Kev’s popularity with producers was the late Ross Higgins well remembered as Ted Bulpit in the TV show “Kingswood Country”. Ross has been immortalised as the voice of Louie The Fly.

Some of our greats

Brian Henderson should be up in lights as a voice but he is best known as the host of Bandstand and for 45 years presenting the Nightly News on Channel 9.

Roger Climpson, another news presenter and voice over artist is the same age as Brian Henderson. Roger also hosted This Is Your Life.

The late Paul Rickets was well known as the imaging voice for numerous radio stations. He was the corporate voice for Air New Zealand and Foxtel’s History Channel.

New Zealand was born Peter Gwynne (vale) was one of Australia’s most prolific voice artists. His Kiwi wife, the actress Cecily Polson, is still gracing the microphone.

So many more voices

There are The “BIG” voices we are accustomed to hearing on the airwaves. Names like Holger Brockman, Ray McGreggor, Jaan Torv, Steve Britten, and Mike Drayson.

Not to forget the gravelly utterings of Channel 9’s Phil Baildon. He's the voice behind those OTT promos for A Current Affair.

The list is long. John Laws have to rate a mention for both longevity and low tones. Then Alan Jones and the historical voices of Chips Rafferty, Jack Davey, Bob Dyer and before them Roy Rene was king.

So what voice over are looking for…someone fresh or a new twist on an older style. Whatever voice you need you’ll find it at https://www.mediagroup.com.au/