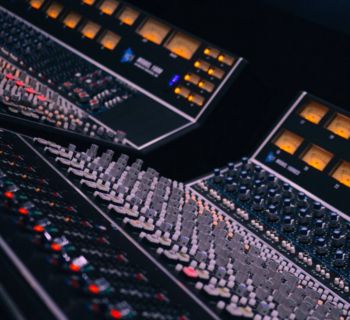 The words recording studio tend to make most people think of huge barn-like structures with padded walls and doors two feet thick. The phrase conjures up an image of four long-haired geezers on a zebra crossing out front of Abbey Road the world’s most famous recording facility.

It’s true that some of the worlds larger studios are still in use, but their numbers dwindle daily. The bean counters can no longer justify the huge expense of maintaining such expansive real estate.

With the advent of digital recording technology tape recorders, the size of industrial freezers went the way of the Dodo. All the associated analogue outboard gear suffered a similar fate.

It was goodbye to the racks of line amplifiers, parametric equalisers, reverb units, compressor/limiters, the acres of patch bays and farewell to the room in the basement devoted to the plate echo!

Today an average laptop with some software and a condenser microphone set up in the wife’s walk-in wardrobe is all the investment required to create one of the new voice over recording studios.

Purists will still argue that digital recording is, despite sampling rates in excess of 44k/sec, only just beginning to approach the audio qualities of analogue systems.

To these audiophiles, most ordinary folk will say ‘who cares?’  We don’t miss the scratchy records or hissing tapes. We don’t have to worry about generation loss. And we love the idea of recording the band’s first album in a tent.

However, despite the technological advances, the biggest influence on recording quality is still the experience of the producers, engineers and the artists’ talent.

Let the sunshine in

Media Group, the business audio specialists own and operate a state of the art studio complex on the fabulous Gold Coast in Queensland, Australia.

Here the people pushing the buttons and “bumping their gums” are responsible for the high-quality productions created in the company’s voice over recording studios.

Media Group proudly boasts a tremendous line up of professional Male and Female voice talent. All ages. All styles from the straight announcer to whacky characters. Couple those vocal talents with a team of experienced writers, engineers and producers and you have everything you need for your next audio project.

Step into the sunlight. Go to www.mediagroup.com.au

You have nothing to lose but that office tan!