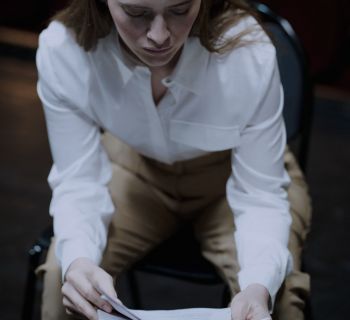 Get your voice in the door

How is your demo reel shaping-up? To aspiring newbies trying to enter the super-secret world of voice acting your “demo reel” is your calling card.

In fact, it is the single most important item in the arsenal needed to smash down the doors and get started in the voice over business.

Of course the name “demo reel” is a hangover from the analogue days and just as archaic as the term “voice over”.

In the pre-digital era, sound studios were equipped with tape recorders. These machines utilised magnetic tape which was spooled onto a reel.

The blank tape would be loaded onto one reel before passing over the machine’s “recording head” where the signal would be transferred to the tape.

After the signal had been captured on the magnetic tape it would be wound onto the “take-up reel”.

The speed at which the tape ran had an impact on the recording quality. The faster the better. So magnetic tape came on various sized reels.

Tape was expensive but could be erased and re-used many times. Unfortunately accidents happen, and to this day tapes do get accidently deleted.

A great many recordings were lost going through the radar detectors used to screen luggage at the airport.

Be thankful the industry has we’ve moved on even if we persist in using the old terminology associated with “reel to reel” tape recorders.

Your “demo reel” is a short collection of your best voice overs.

Starting out you may have to invent some “jobs” if you have yet to do any real voice work. For that to happen you’ll need some Voice Acting Scripts to record.

If you are comfortable writing original scripts record them. However you can also “paraphrase” existing TV and radio commercials that you believe will suit your voice.

You might be able to imitate some celebrity voices. Or invent a “character voice” to demonstrate your versatility. Maybe you can play a dog or a talking house!

There is always a demand for corporate work so include a short sample of you reading Voice Acting Scripts for a company video or website.

Your demo reel needs to be as slick as. So it’s worth investing a few bucks to have your demo reel done professionally by Media Group, the business audio specialists. www.mediagroup.com.au